There is only one format of Dodgeball under JAM Rules. It is described in its entirety below.

All Dodgeball games are approximately 55 minutes in length. Please arrive early to ensure you get the full use of your allotted court time. Regardless of when your game begins your game will always end on time to allow the succeeding games to begin at their scheduled time.

Teams are comprised of six (6) players on the court at a time. A default will occur if any team cannot field a squad by 10 minutes after the official start time.

Gender Numbers: Each team must have a minimum of 2 of each gender on the court at a time.

Defaults: Teams will default a match if they cannot provide a full team 10 minutes after the scheduled start time. A team can play with a minimum of 4 people, as long as 2 of the players are women and 2 are men.

Substitutions: The 6 players that start each game are the ONLY players that can play during that particular game (i.e. for that point). Substitute players must wait until the next game before playing. Teams can alter their roster for each game, as long as the gender requirements are met. Exception: Injured players can be substituted midway during a game if necessary (male for male, female for female only).

All Dodgeball gyms vary in size and there is no set standard for an JAM Dodgeball surface. 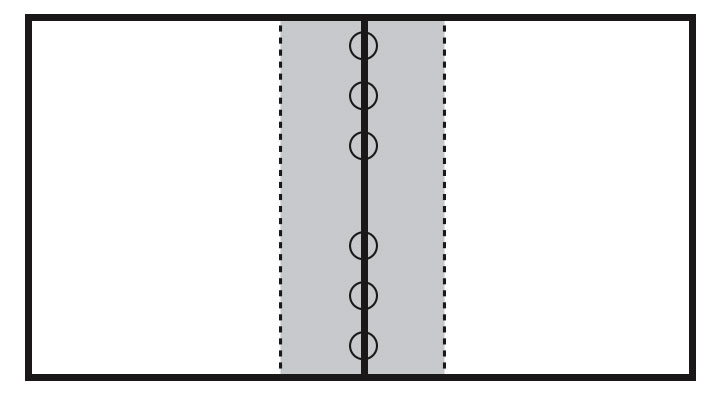 The following outlines the basis of the rules of Dodgeball Programs:

Starting the Game and General Rules:

i. 4 dodgeballs will be used for each game.

ii. To start a game, each team stands on their respective back line. Two dodgeballs should be placed approximately 5 feet back from the centre line on each half court. The point will then be started by shouting "READY, SET, DODGEBALL!"

iii. Once play has started, players must remain on their own side of half.

vii. Eliminated players should sit on the opposite side/corner of their team bench (in an effort to clarify who is participating in that particular game). A bench area should be defined (using a bench turned on its side) and this area is out of bounds. Live players may only enter this area to retrieve balls.

ix. Players cannot lean up or jump against the walls in an effort to avoid being hit.

Throwing the Balls and Eliminating Players:

i. Players can only be in possession of ONE ball at any given time. So, a player already in possession of a ball cannot catch/touch another "live" ball. A player that touches two or more "live" balls is eliminated. However, players can block a 2nd ball with a ball that is already in their hands, and "dead" balls that are on the floor are okay to be kicked or rolled to a teammate.

NOTE: Since the player who attempts a 'second catch' is out, the thrower is not out if the ball is indeed caught.

NOTE: Under no circumstances can a player (with or without a ball in their hands) be eliminated by being hit with a "dead" ball.

ii. Players can throw a ball in any manner (with the exception of squeezing the air out of the ball) from anywhere on their own side of the court.  NOTE: The ball MUST be thrown to eliminate an opponent.  A player cannot touch an opponent with a ball being held in their hand.  The ball must be released for the throw to count.

iii. UPDATED! (SPRING 2019) A player/team cannot hold a ball in their hands in an effort to "stockpile" the balls on their own side of the court. Players must release a ball within 10 seconds of taking possession (which includes touching with hands and/or feet). The goal is to keep the game moving. Teams that do not throw a ball within this 10-second timeframe will be required to give all balls on their side of the court to the other team. If neither team is making an effort to take possession of a ball, both teams will be required to take possession of the ball at the same time in order to keep playing. The shot clock only begins once the opposing team counts OUT LOUD downwards from 10.

iv. Once in possession of a ball, a player cannot under any circumstances place a ball back down on their own side of the court. By doing so, that player is out. This includes putting a ball down in an attempt to catch on a second incoming ball. If you drop the original ball (by accident or on purpose), you are out. If a player throws a ball and it touches the ground before passing over half, the player who threw the ball is out.

v. NEW! Players may pass a ball to their teammates. However, if the receiving player does not catch or fumbles the ball - the player who attempted the catch is eliminated. Furthermore, since a team only has 10 seconds to throw the ball, a pass to a teammate does NOT reset the 10-second clock, and the ball must be thrown within 10 seconds from the time the first teammate touched the ball. And, remember that no player can touch two "live" balls at the same time - or they are out.

NOTE: a ball is "live" once released, so a purposeful pass to a teammate, an accidental release of the ball that might hit a teammate or a throw meant for your opposition that hits your teammate all falls within this rule.

vi. To eliminate an opposing player, a "live" ball must hit the player from the NECK downwards. An opponent that is hit in the head is NOT eliminated but the thrower of the ball is eliminated. This rule applies regardless of whether the player was bending down, lying on the ground, jumping, etc. A head shot is a head shot. NOTE: that the ball's first point of contact is what matters (i.e. if a ball first hits the player in the leg or off a ball being used to block, and then bounces up and hits their head, the player is OUT). Teams may agree to play by a modified version of this rule if both captains agree PRIOR to the game starting.

NOTE: a player may not purposely use their head to hit the ball. A player that does so is out. Please don't abuse this rule.

vii. If a player catches a "live" ball that is thrown at him/her, the thrower is OUT. IN ADDITION, the team that caught the ball can return a previously eliminated player to the court. The player that returns to the game MUST be the first player who was ruled "out" during that particular game (and the order of returning players should be maintained...i.e. the third player to be eliminated will be the third player to return to the court). Reminder: substitute players must wait until the next game. A player that is already holding a ball cannot "catch" a second ball (as per Rule 4i)

viii. A player that is holding a ball can use it to deflect/block another ball that is thrown at them by an opponent. However, if the ball being held is dropped due to the second ball, the person who dropped the ball is OUT. A deflected ball is still considered "live" until it hits the ground/wall/obstacle. (i.e. if it hits another player or the player using the ball to block before hitting the ground or wall, the hit player is out).

ix. A live ball that rebounds off of a player (from an unsuccessful catch, hits off their body, is deflected by another ball, etc) may be caught by any other in-bounds player prior to the ball becoming dead (hitting ground or wall). As usual, the thrower is OUT, and the catching team can return a player.

x. It is the responsibility of all players to make a fair and honest call as to whether or not they were hit. Please remember, "it's just dodgeball". Ultra-competitive players are not welcome.

xi. Every time that only 2 players remain on the court (1 from each team), the timekeeper should announce that the two players have "one-minute" to eliminate each other. After the one minute has expired, if the game has not yet ended, each team will return one player to the court. (again, each team must abide by their order of returning players).

If a match is tied at the end of a playoff game, a 3-minute overtime session will break the tie. (a new game should be started right away with a full 6 players). If this final game is not completed within the 3 minutes, then the team with the most players remaining on the court will be declared the winner. If, after 3 minutes, there are the same number of players left on both teams, then the team that eliminates the next player wins the game. Please note that playoff games should only be 50 minutes in length in anticipation of needing the extra time to settle a tie.