There is only one format of Kickball under JAM rules. The format is described in its entirety below.

Click here for a score sheet (Adobe PDF version).  You will need Acrobat Reader to view and print this document: Click here to download and install this FREE software.

All matches of Kickball are 7 innings in length but have a 55-minute time limit. Please arrive early to ensure you get the full use of your allotted field time. Regardless of when your game begins your game will always end on time to allow the succeeding games to begin at their scheduled time.

Time Keeping: If you have an JAM Ambassador on site, they will be keeping track of time and will determine the end of your game. In this instance, you will receive a warning indicating the final five (5) minutes of your game and a final signal for the end of your game. Once the final signal occurs your game is over. If you do not have an JAM Ambassador on- site, please designate one person from each team to keep track of the time. Games are 55 minutes in length, or 7 innings long (whichever comes first). If all 7 innings are not completed by the 55-minute curfew, the score will revert back to the last completed inning. No new inning can start within 5 minutes of the scheduled end time of your game.  Please be courteous to the teams waiting to play.

Defaults: Teams will default a match if they cannot provide a full team 10 minutes after the scheduled start time.

Weather: Games that are forced to be cut short due to dangerous playing conditions (i.e. weather) will end with the final score being the score at the end of the previous completed inning. However, if the game ends with the home team in the lead without finishing the inning, the home team wins by the current score.

A full squad consists of nine (9) players on each team.

Gender Numbers: Teams are comprised of nine players (1 rover) with a minimum of 3 of each gender on the field.  A team can play with a minimum of 7 people, as long as there are 2 of each gender. A team can also play with 8 people if they only have 2 of one gender (i.e. 2 women), BUT a team of 9 or more players that only has 2 women can only have 8 players on defence (you will be playing short 1 person on defence - meaning there will be no rover).

Defaults: An official default will occur if a team cannot field a team with a minimum of seven (7) players, including two (2) people of each gender within 10 minutes of the official start time.

Exceptions: Captains may agree to waive the rules regarding minimum people but this should be decided before the game starts.  The rover may play anywhere on the field with the exception of the catcher’s position. If both teams agree then the game counts.

KICKBALL 7s. If you're playing in a Kickball 7s league, please note that an official default will occur if a team cannot field a team with a minimum of five (5) players, including two (2) people of each gender within 10 minutes of the official start time.  Kickball 7s will eliminate the Short Stop and Rover positions on the field.

All diamonds will vary in size, but the diamond dimensions remain the same for all JAM Kickball games. 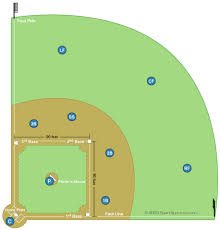 The setup for Kickball consists of four (4) softball rubber bases, one (1) kickball and two (2) pylons.

The kickball set up is the same as a standard baseball diamond, having a first base, second base, third base and home plate.

Kickball bases should be placed roughly 15-20m (20-30 paces) apart, or whatever works best given the size of the playing area. The pitcher’s mound should be roughly 10m (12 paces) from home plate. Both teams should agree on the placement of the bases.

Team captains are responsible for bringing the supplied kickball, four throw bases and field permits (if necessary) to all games. Both captains will need to bring their bases to every game so that the extras can be used as safety-bases at 1st base and home, to mark the pitcher’s mound as well as the suicide line between 3rd base and home plate.

Athletic shoes are required, however, metal cleats are not allowed.

Defaults: There is no default for players that don’t wear the right colour. However, that player must do everything they can to ensure it’s not confusing for the opposition. Whether this means wearing a pinny, a hat, a teammate’s shirt, etc. Under no circumstances can a player purposefully deceive the opposition.

The game of Kickball, otherwise known as Soccer Baseball, combines elements of both soccer and baseball into one sport. Essentially, the sport is very similar to baseball with the exception that the team on offence will be kicking a ball instead of hitting the ball with a bat.

i) The "home" team will be determined by a coin toss (rock - paper – scissors is also welcomed).
ii) Foul ball calls must be made by the catcher. A foul ball is:

iii) Close "out" or "safe" calls at 1st base and 3rd base are to be made by "base coaches" (i.e. extra players on the offensive team).  Close "out" or "safe" calls at 2nd base and home are to be made by the pitcher.  Teams should do their best to ensure that base coaches are being used.  If base coaches are not being used, all close calls should be made by the pitcher.  Please do your best to ensure that the game is being called in a fair manner.

iv) A 'foul ball' pop-up behind home plate can only be caught for an out if it goes higher than 3 meters (10 feet).  A ball not exceeding this desired height is considered a 'strike'.

v) There is no “infield fly rule” in kickball.

vi) Pinch Runners:  If a player is injured but would still like to bat, a pinch runner may be used. The pinch runner must be the most recent player of the same gender who was recorded as out. The batter must still make his/her own way to first base, and if he/she goes to second or third base, then a pinch runner may not be used (Exception: if there is an error that results in an automatic extra base (i.e. ball goes out of play) then the batter may take the extra base and still use a pinch runner). Please note that this rule is meant for legitimately injured players, and should not be taken advantage of.

vii) No team can have more than 4 players in the outfield at any given time.

viiI) Outfielders must not encroach within 6m (20 feet) of the baselines (the baselines spanning 1st and 2nd or spanning 2nd and 3rd) while the ball is being pitched to a batter.  As soon as the ball is batted, outfielders may move anywhere on the field in reaction to a play (i.e. they may move towards the infield).

Kicking:
i) A legal kick occurs when the ball makes contact and is kicked below the knee, therefore, is hit by the leg or foot.
ii) If the ball is redirected by any body part above and including the knee, the kicked ball is disqualified and will count as a strike against the offensive player.

i) There is absolutely no sliding. Any base runner that slides is automatically out.
ii) There are no leadoffs for base runners; you must wait until contact with the ball is made. Please respect this rule.
iii) Players cannot steal bases. Runners may only advance once contact has been made with the ball.
iv) All ties will go to the runner.
v) A runner may advance only 1 base if the ball is overthrown and goes out of play
vi) 1st base and home plate will have "safety bases". As such, there will be a base for the first baseperson and the catcher to touch and a separate base for the runner to step on.
vii) There is a "suicide-line" halfway between 3rd base and home plate marked with an extra base. Once the runner has crossed this line, they cannot return to 3rd base. If they do, it is an automatic out.
viii) In order to prevent injury and protect the defensive player attempting to make a play on a base runner, the base runner will be called out if they remain on their feet and deliberately, with force, crash into a defensive player holding the ball, waiting to apply a tag.

i) A team can only score a maximum of 8 runs in one inning. EXCEPTION: A team has no run limit in the final inning of the game.
ii) Mercy rule: If a team is up by 15 runs or more after the 5th inning of play, the losing team has the option of calling the game or choosing to continue.

i) Three outs by a team complete their half of an inning.
ii) An out generally occurs in similar situations as a softball game. For example:

iv) The play is dead and runners can no longer advance once the ball has been returned to the pitcher.

i) Captains should decide prior to the start of the game if they are going to play any ground rules with regards to boundaries. Please make sure that both teams are aware of these rules so there is no confusion.
ii) The area out of the field of play, behind the backstop, dugouts, home run fences and/or the fences running along first/third base line is out of bounds, and the ball is dead when it goes in those areas.  Additionally, for the fence line (or imaginary fence line if playing at a field with no backstop) that runs along first and third base, when the fence stops, imagine the line if it kept going (parallel to the foul line)...if the ball goes behind this line then it is out of bounds and play is dead.  If the ball goes out of bounds while an active play is going on (i.e. an overthrow to first base) then the baserunner(s) will advance one extra base.

All games are self-officiated. Disputes about a possible infraction are to be discussed amongst the people involved in the play. If an agreement cannot be reached, don't waste time arguing the play - simply redo the play. Please play safely and with good spirit.

The game score at the last full inning (7th or at the end of 55 minutes) will determine the winner. The score can be tied in regulation games.

There must be a winner in a playoff match. In the event that the match ends in a tie, teams will partake in the following tiebreaker: